The baya or the art of African seduction

By AFRIKHEPRI FOUNDATION on January 24, 2020

To seduce a man, apart from their personality, women have several tricks and weapons to choose from. Each chooses what seems to him the most effective. Makeup, clothes, hairstyles come to decorate their parade. Some tactics are universal. Others are peculiar to peoples. In Africa, this little thing that is recognized as capable of falling a man is the baya.

The baya is a set or necklace of pearls used by African women as an ornament of their hip. Afflema in Akan or Baya in Malinké. He has a particular goal: seduction. Thus in Africa it is the ideal weapon to turn the head of the desired man.

The baya, like the afflema, consists of various raw materials such as porcelain, rubber, excrement of a rare species of butterfly, rock and wood. These pearls usually come from Indochina, Morocco and Lebanon. In West Africa, it is Mali, Senegal, Nigeria and Ghana. The baya is made in Senegal by the Laoubè who are Fulani.

To increase the mystical powers of the baya, it is advisable to use a perfume nimmalinun Oussounan which means in Wolof "I get drunk". It is used to tame and retain one's spouse at home. Senegalese women and Malian women have their ultimate secret: the baya. What can be said about Akan women who have their daughter baya gold in the first weeks of her marriage?

The family of the bride, to better seduce their son-in-law, adorns the body of their daughter with pearls. The red beads are used to support the Kodjo There are also beads for the knees and forearms. It is advisable to wear the baya with the Pindal betcho which is a piece of loincloth arriving just at the knees. The new bride has to highlight its red beads during small discussions debates before the actual reports. All these tips are for the sole purpose of seducing his Jules.

As can be seen, the baya is also an aphrodisiac that causes the men to lose their heads apart from being an object of protection against evil spirits. But with modernization, this dress is losing its value to the chains that women also use around their hip. Always for the sole purpose of seducing.

An article by Rhythms of Africa 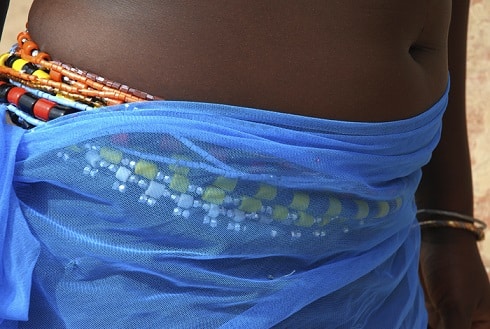 To publish your article on this platform you just have to click on a social icon of your choice, write your article and share it.