The therapeutic origins of rumba
0 / 5 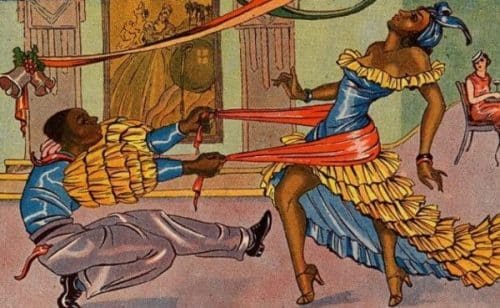 LLast week I attended a conference by Ya Elima, dancer, therapist, author and initiator of the Longo dance, the African anchor dance. During the conference, the latter insisted at length on the depth and the spiritual aspect of African dances. Due to colonization, many Africans have moved away from their cultures so that we have a superficial knowledge of them.

For example, we dance, move our pools, and yet we are no longer able, for the majority of us, to give the meaning of these movements.

To illustrate his speech, Ya Elima gave the example of Rumba, a dance whose essence, original and deep meaning, is unknown to many Kongolese. Indeed, if you research the origin of Rumba, you will read that this dance is an invention of the ancient Kongo slaves, that the term has its origin in Kikongo Nkumba which means the "belly button", or that it is a sensual dance, "a folk dance, an evocation of carnal love."

Here is a video about the Kongo roots of Rumba.


You should know that in African initiation dances, not to be confused with popular dances (ndombolo, offset cut, azonto etc) each movement has a spiritual meaning and a therapeutic dimension (which heals and heals the mind). Our elders did not gesticulate, all movement, as complex as it was, was carried out with a specific intention. For example, " the basin dance in a circle movement is the proclamation of our unity with the created and the uncreated. Infinite pelvis movements proclaim our eternity, our immortality"(1)

Regarding Kumba, the ancestor of Rumba, Ya Elima specifies this:

« One evening, I was told that there would be Nkumba. Nkumba is a dance that is supposed to re-harmonize a couple. NKUMBA translated into French as "navel". With us, the navel is very important. It was a piece of cord that connected us to our mother, who made us "one" with her. And this cord, it is brought to be buried in order to connect us to Mother Earth, and to make "one" with it. The NKUMBA, the navel, keeps in us the trace of this love, this peace, which seems to be drowned in the meanders of time. It is quite simply the peace of this love of the Primordial Mother that we imagine having lost, thinking alone. The navel stimulus calms this pain and soothes us for a moment that passes as a reminder of what we are. In NKUMBA, the two partners (a couple in life in general) dance close to each other, rubbing their navel against their navel. I arranged to be present that evening. There was a couple of forty years in marital difficulty. At the end of the dance, I saw the couple, who were in the process of divorce, leaving hand in hand reconciled. One of the old men who was there during the whole ceremony washed and said: "There! (Everything is said, everything is done). And everyone went home. I found it simply divine. Everything was there: simplicity, innocence, spontaneity, wisdom»(2)

Also, in light of this explanation, we therefore understand that Nkumba, and therefore Rumba, was originally a therapeutic dance, intended to heal and restore harmony within a couple. I find this fascinating ! Our ancestors were really great! It's impressive !!!

Born in Kongo, I lived there until 'at my 11 years and I bathed in the Rumba kongolaise because my father was a true music lover (impassioned), and yet I did not know this history. I also believe that few Kongolese know the therapeutic origins of this dance. In short, Rumba, like the Tango and other dances that were "invented» by Africans deported to the new continent, draw their roots from African initiatory dances. However, cut off from Mother Earth, African-Americans have kept the movements, the rhythms, the percussions, but unfortunately have forgotten the deep meaning of these.
Due to colonization, African dances have lost their sacred dimension, and today, Westerners, and even Africans themselves, improperly qualify them as folk. This term is part of the colonial vocabulary used in the past by Western ethnologists to minimize and denigrate so-called primitive cultures. Folklore refers to popular traditions - profanes - of a people or a country, but as I tried to explain above, African dances have an initiatory, spiritual dimension, in other words sacred. The sacred being what relates to and is linked to MOZALI, the One Who Is, God.
In African culture, before colonization, everything that man did was in direct relation, in connection with the Divine, in other words, everything was sacred: music, dance, art, architecture, science , agriculture, fishing… All human activity had a spiritual and sacred dimension. There was no room for the layman. Everything started with God and everything ended with God. In his aspects of African civilizationMbuta Amadou Hampaté Bâ recalled this: "The black African man is a born believer. He did not wait for the Revealed Books to acquire the conviction of the existence of a Force, Power-Source of existences and motor of the actions and movements of beings. Only, for him, this Force is not outside creatures. It is in every being. It gives it life, oversees its development and, possibly, its reproduction.(3) If you live in Paris, then you may have seen this poster by using the metros. It's an advertisement for a musical performance by the Chinese classical dance company Shen Yun which will take place soon ..

When I saw this poster, I was struck by the description: "Enter the world of the divine.» Some wonder why. Well, quite simply because in Chinese culture (Asian in general) dance has a sacred dimension, in other words, it is associated with the Divine; just like in African cultures. And yet, we never talk about Chinese dance, Chinese culture, as part of folklore.

Paraphrasing the text above, one could say: «For 200 years, divine cultures flourished on Earth in Africa. These treasures of humanity almost got lost…»

Although they experienced colonization, the Chinese, unlike the Africans, were not separated and distant from their culture, paradigm, in other words from their identity. Connected to their ancestors, whose prowess and genius they proudly celebrate, they are able to share the best of their culture and civilization with the rest of the world.

« Colonization too often misrepresented the African, it deprived him of his ancestral values ​​and led him to adopt our forms of thought, action and creation " Roger Pierre Turine, art critic (4)

This is why, I think it important, that we young Africans of the XNUMXst century, to re-study African cultures with a look - paradigm - non-European in order to find the true meanings of certain practices, their therapeutic, social, philosophical and even spiritual dimensions.

African cultures are invaluable. Re-learn to know them, to reconcile with them, and in turn, celebrate them, develop them; and share them with the rest of Humanity.

Before we leave ... Let's talk a bit about Rumba, if you do not mind!

Here are some Rumba Kongolaise songs that rocked my childhood. It is always a real pleasure for me to listen to them again.

Who is God, with Morgan Freeman (Video)

THE KINGDOM OF BENIN

The African origins of the Vitruvian man