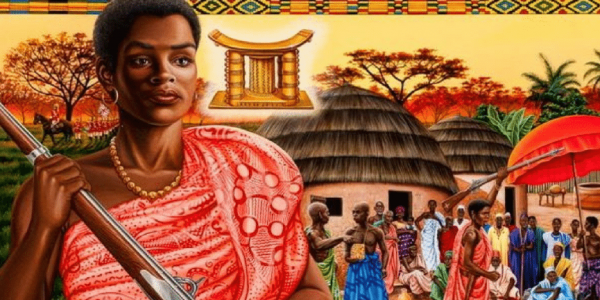 You have reacted on "Yaa Asantewa, Queen Mother of the Asante Empire" A few seconds ago

Yaa Asantewa, born around 1840 and died on October 17, 1921, had received the title of queen mother of ejisu by her brother Nana Akwasi Afrane Okpese, the Ejisuhene, ie the head of Ejisu, of the confederation Asante, now known as Ghana. Yaa Asantewa made history for leading this famous rebellion against the British, an anti-colonialist war known as the War of the Golden Stool.

During her brother's reign, Yaa Asantewa witnessed a series of events threatening the future of the Asante confederation, notably the civil war from 1883 to 1888. When her brother died in 1894, she will use her rights as queen mother to nominate her grandson “Ejisuhene” (chief). And when finally the latter was forced to go into exile in Seychelles in 1896, accompanied by the king of Asante Prempeh I, Yaa Asantewaa became regent of the Ejisu-Juaben district. It was then that British General Frederick Hodgson demanded that he be given the “Golden Stool”, a symbol of the Asante nation.

This disrespectful request will force members of Asante's government to meet in Kumasi to discuss the return of the King. However, at the meeting there will be a difference of opinion regarding this return. Yaa Asantewaa, present at this predominantly male assembly will rise and address the assembly in these today famous terms:

I see that some of you are afraid to go to the front and fight for our King. If we were in the days of Osei Tuty, Okomfo Anokye and Opoku Ware, the leaders would never have sat there watching their King be carried away without even firing a single shot. So it is true that bravery no longer exists in Asante?

I can hardly believe it. Things cannot happen this way! I see myself obliged to tell you that if you, Asante's men do not stand up, we will. Yes, we women will go. I will call the women, and together we will fight the white men. We will fight until the last of us falls on the battlefield.

Thus in March 1900, Yaa Asantewa will take the directive of the rebellion of Asante, enjoying in particular the assistance of certain nobles of the kingdom. The rebellion will see the light of day at Fort Kumasi, where the British have taken refuge. This fort still exists today, which has become a Military Museum. After several months (March to September), the British will seek reinforcements to end this rebellion. Queen Mother Yaa Asantewa and fifteen of her closest advisers will be captured and also sent into exile in Seychelles.

This rebellion will sign the end of a series of wars throughout the 19th century, and on January 1, 1902, the British could finally make the Asante Empire a protectorate of the britance crown, something that the army of Asante them had prevented accomplishment for at least a century. Yaa Asantewa died in exile, and three years after his death in December 1927, Pempreh I and other exiled members of the court of Asante were allowed to return to their territory.

The queen mother's dream was finally fulfilled in March 1957, when the Asante protectorate gained independence and became part of Ghana, the first African nation to achieve such a victory. Yaa Asantewa remains a highly regarded figure in the history of Asante and that of Ghana. It represents the symbol of courage against the injustice of British colonialism.

The “Yaa Asantewa Girls' Secondary School”, a secondary school for young girls who bears his name, was created in 1060 to encourage the leadership of women in Ghanaian society. In August 2000, Ghana's centenary will be celebrated for a week and the works of Yaa Asantewa will be remembered. At the same time, a museum was dedicated to the Ejisu-Juaben District. But unfortunately, a fire will destroy the museum in July 2004 and destroy several objects, including the sandals and the combat outfit that Yaa Asantewa wore.

Zulu
No Result
View All Result