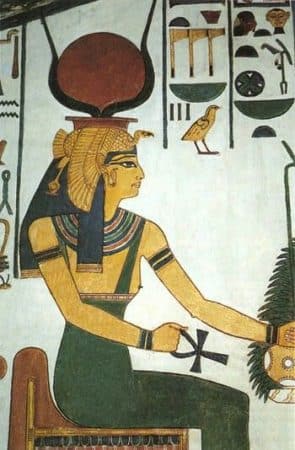 Het Heru (also known as Oshun and Nana Afua in Yoruba and Akan) is the deity or concept in our Afrikan culture who represents birth, death and re-birth. As we exit from one realm, we enter into another. Transition therefore, is ontologically paramount to our culture and must be swift as the ways of Ma’at to maintain divine order. The Ndebele of Zimbabwe are part of the Nguni people of Southern Afrika who migrated in the early 1800s when their King Mzilikazi ka Khumalo fled Tshaka Zulu in what is known as KwaZulu in today’s South Afrika. They have settled in the Matebeleland Province of Zimbabwe. They speak a language called isiNdebele which is an older version of Zulu. Het Heru has varied conceptualizations throughout Afrikan cultures. This article will discuss how she is conceptualized by the Ndebele.

Conception takes place when an ancestor in the spiritual realm is pulled into the womb of an Afrikan woman through the unification of two Afrikan bloodlines. Het Heru is the deity whose crown bears the solar disk held by two cow horns and it is not by coincidence that the female ovaries are shaped in the same way. When a woman was married in Ndebele culture, traditionally the man’s family presented her family cows. We call this cow token lobola and its significance pays tribute to Het Heru in respect of the transition of the ancestor into this world that the journey may be swift.

‘Umfazi ka lotsholwa, kulotsholwa abantwana’ is a saying which teaches that lobola is paid for the children born, not for the wife who is taken from her family. If a child is born without lobola being arranged between two families, the consequences might be a disrupted transition and it is regarded as a violation against the woman and her family. Afrikans have always tried to avoid this in our societies in the past. Lobola is also a sign of respect as this shows that the man is willing and able to provide for his extended family as Umkhwenyana  a ‘son-in-law’. In addition, he will also present gifts to the woman’s parents in a gesture that acknowledges them as respected grandparents of his child – the ancestor re-born, brought into the world under respectable circumstances.

When an Afrikan dies, a cow or bull is symbolically slaughtered to pay homage to Het Heru that the transition from this world back into the ancestral realm will be swift. The cow that has been slaughtered also feeds the people who have gathered for the funeral to comfort those at loss through singing, engaging in dialogue where they share kind words and lift each other’s spirits in times of loss. They aslo cry for and pay homage to the person who has left earth physically and began the journey spiritually to the world of the ancestors. We symbolically dig a hole in the ground and burry the person just as we plant seed anticipating re-birth at the beginning of a new life-cycle.

Imbuyiso is a ceremony that marks the end of the mourning period for a departed one, usually after one year. Imbuyiso marks the end of the journey and homage is paid to Het Heru again through the slaughter of a cow or bull to mark a successful transitioning and re-birth into the ancestral realm. During this ritual, the departed is also welcomed back into the family as a guardian ancestor (also known as Egungun and Nananom Nsamanfo in Yoruba and Akan) to protect and guide family members here on earth.

Kemet in its Afrikan Context

The cultural significance and its tie to Kemet is that these traditional practices are found throughout Afrika today, in some places with slight variations. The task however, is for Afrikans to make connections and start to look for similarities in our culture that will unite us rather than continue looking for differences to justify colonial divide and rule strategies. There is urgency in this cause because as we become more Westernized we lose the essence of the cultural background of the concepts that shape our rituals and they become empty and meaningless and we drift further away from spirituality.

Today lobola, burial and imbuyiso have been corrupted. For example, lobola is no longer regarded as homage to Het Heru but as a ‘get rich quick’ scheme or ‘bride price’ that fathers will decide upon the price based on how much Western education the daughter has received. It becomes a burden for the young couple as it creates financial hardships and can cause family disputes if ‘debt’ is not paid. Afrikan families have moved away from their rural settlements due to urbanization and no longer keep livestock. In many cases when people die today, the slaughter ritual is not carried out but rather people improvise through purchasing meat from the local butcher to feed mourners at the funeral. Imbuyiso is no longer observed as people claim that they have moved away from cultural practices into Christianity and therefore they believe the transitioned person will rise again and be judged when the Christ returns or simply that they do not believe anymore in what Christianity has shunned as ‘paganism’ and therefore they have no need for guardian ancestral spirits in the home. Instead of imbuyiso they hold Christian focused ‘memorial’ services for the departed.

Afrikans, if we are to be re-born in order to reclaim and revive our spiritual selves who once lived in harmony with creation, our transition must be swift. We must remember Het Heru.

Het Heru in her Afrikan Context: The Case of LOBOLA and IMBUYISO in the Ndebele Tradition